For 2017, our show has 32 channels, and uses 2 Light-O-Rama CTB16PC controllers. These controllers provide basic AC on/off/dimming capability and are running in DMX mode. To get the data to these controllers, a custom built/DIY Wi-Fi DMX module is connected inside the enclosure, and then a cable is ran from that box to the 2nd one in a daisy chain configuration. 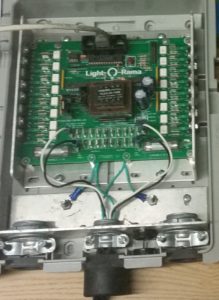 Inside an LOR CTB16PC enclosure 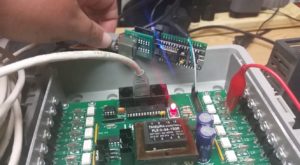 Inside of a seperate main control enclosure, we house an FM radio transmitter, a Linksys WRT-54G Router, and a Raspberry Pi running the Falcon Pi Player (FPP) software. FPP is a program built on top of Debian Jessy (linux), and sends the audio to the transmitter, and all of the control/lighting data over the network to each controller. Using a Linksys Router allows us to have everything on a seperate, dedicated “Show Control” network to prevent lag and interference from devices on our main network. 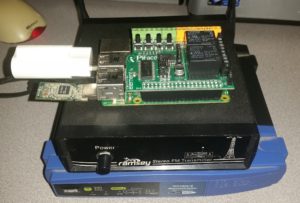 Attached to the Raspberry Pi mini-computer, is a PiFace board (for the Real Time Clock chip), a USB flash drive (holds the show songs/data), and an external C-Media based USB sound card (connected directly to the transmitter).

The Raspberry Pi/FPP is configured to run specific events/scripts at set times throughout the night, for example: start the show at 6pm, stop the show at 10/11pm, start/stop background radio stream when not running a show, turn on/off our morning static display, etc.

Connected to the WAN interface of the Linksys router is a CAT5 cable that goes into the garage, and connects to our main home network. This allows us to configure different settings on the fly as needed, as well as for the atomic clock and background radio stream data over the internet.

In the past we have used Light-O-Rama software to control the show, however for this year and for the foreseeable future, we are using a program called xLights. xLights is an open source, lighting design/sequencing program.